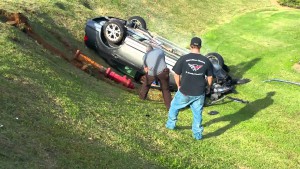 Jesus takes the wheel, and it turns out he’s a really bad driver.

From Lauren Baheri at the Gaston Gazette

Police say a woman driving in circles in a Gastonia intersection rammed two police vehicles and struck two others before overturning her car down a hill.
The incident occurred around 4:25 p.m. Thursday at the intersection of Ozark Avenue and North New Hope Road. No one was seriously injured.
According to Gastonia Police Capt. Rodney Aldridge, police were called after the woman was spotted driving in circles in the intersection. A witness says she was waving her arm out of the window and yelling as she drove.
When a Gastonia officer arrived on scene, the woman stopped, Aldridge said. When the officer asked her for her name, she replied, “Faith, hope and love,” Aldridge said.
The officer tried to calm her, before she backed up and rammed into his car, according to police.
Rhonda Helms was at the Fast Stop gas station by the intersection and saw the whole encounter. She said the officer had to jump out of the way to avoid getting hit by the woman’s car.
The woman hit the car a second and third time before continuing to drive in circles, police said.
In her tirade, she hit two other civilian cars and another Gastonia police car.
The woman eventually lost control, overturned her car and careened down a steep hill by the gas station.
Helms say the woman got out of the car singing the phrase “Jesus loves the little children of the world.”
She could also hear the woman saying, “Look up. Look up” and “pray for me.”
Helms’ son-in-law Chad McGaha caught the ordeal on video. He says he first noticed the woman driving erratically at least five minutes before police arrived.
He intended to get video of the license plate in case she took off, he said.
Helms said officers had to pepper spray the woman to apprehend her.
Police suspect the woman was having mental problems and took her to CaroMont Regional Medical Center for evaluation. Police could not say whether the woman was also impaired.
Police have not identified the woman or the officers involved in the crash.
She will be charged with assault with a deadly weapon on an officer and careless and reckless driving.
Aldridge says he’s thankful no one was hurt.
“Officers did everything in their power to stop her from harming or killing anyone,” he said.

The majority of the action takes place around the 2:30 to 5:00 mark, but this camera guy misses some of the more intense action while he’s running out of the way.

Short version of another angle taken from inside the bus parked behind the original police car: