The 90’s on the internet were an interesting time.   Most of us were connecting to America On-Line via 56K dial-up connections and hoping not to get “punted” by an internet troll.    Internet lore and memes were becoming the norm in this time, we’re going to break down the top five:

5.   Goatse and other shock sites

We are not going to link you to anything Goatse in the interest of being SFW, but if you are unfamiliar with the term and are feeling adventurous, go ahead and look it up.  (Preferably not before or during a meal)   Other shock sites such as rotten.com were spread around like wildfire.  “Did you see the crime scene photos from that motorcycle gang that got shot?” was a regular question amongst my friends in the late 90s.

Did you know that Bert is an evil supervillian?

Dino Ignacio, an OG internet jokester, started his website in 1997.   He cleverly depicted Bert in all sorts of bad times and places using the wonderful power of a novel tool named Photoshop.  bertisevil.tv still lives today

If your parents were on the Internet in the 90s, they probably thought this cartoon of a dancing baby was hilarious.  For those of you who weren’t around back then, I can assure you that it was just as stupid back then as it is today.   This appeared on the internet in 1996 and annoyingly made the rounds for a while.

Hampster Dance was weird, harmless fun.   The story begins in 1997, a young college girl had a created a website to see if she could get more web hits than a friend of hers.   Her now defunct Geocities page had 392 images of animated hamsters.   To the surprise of nobody, it got very little traffic for months.  Suddenly the link appeared in an email chain and the site blew up. The rest is 90s internet history. 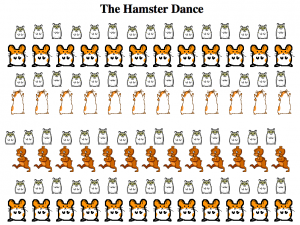 1. All Your Base Are Belong To Us

The classic Engrish scene from a terrible, little known game called Zero Wing tops our list.  What originally appeared as a flash file in 1998, this video makes light of the very poorly translated video game by adding some great music and some state of the art late 90s photoshopping.

What did we leave out?