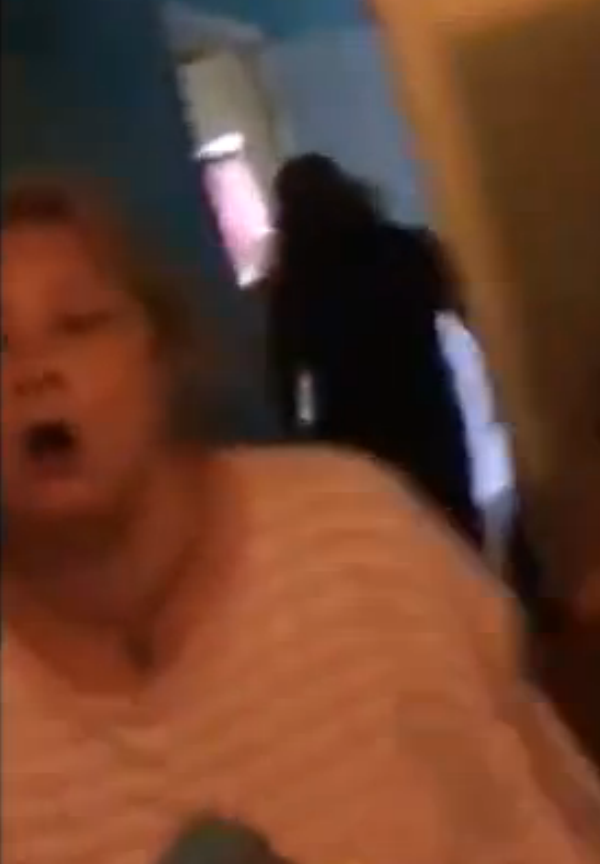 The father recorded the abuse instead of stopping it because he had previously attempted to report her, but the police didn’t take him seriously.

From Nathan Francis of the Inquisitr:

A video of a psycho woman going on a rampage on two young kids has gone viral, with disturbing footage showing the woman repeatedly beating and threatening to kill the children while the father seemingly does nothing to stop it.

The footage shows the woman screaming at the children’s father about a cell phone that he was apparently keeping from her. The video starts with a child screaming in the background and the woman threatening both the children and their father.

The woman, who another woman called Michelle, then climbed to the top bunk of a bed where one of the young children was taking refuge and began to beat the child. She continued to tell the man to give her the phone, but he did not respond.

“Get my phone or I’m gonna keep hitting him,” Michelle yelled.

Another woman then entered and tried to plead with the woman to come down from the bed and stop beating the child.

“Get my phone!” Michelle yelled in response.

“He’s not giving it to you,” the woman responded.

The woman then responded by punching the child again in the head.

“Do you like watching your son be abused, because I’m going to keep doing it,” she responded.

The woman remained on the bed, telling the boy that she will kill him and that no one loves him, not his siblings and not his mother or father (the woman appeared to be his step-mother or possibly his father’s girlfriend — it is never established in the video).

The woman continues to abuse the children through the course of the horrifying nine-minute video, until the man finally brings the two children into a van with plans to leave the situation.

Though the video went viral, including a post on Reddit that attracted thousands of user votes and hundreds of comments, it appears the incident actually took place sometime in 2014.

The site But That’s None Of My Business shared some more details, including an explanation of why the man did nothing to help his children.

“ButThatsNoneOfMyBusiness.com obtained video of an OHIO MAN named Matthew – who had his ex-wife ARRESTED for abusing his children last year. When Matthew ORIGINALLY called police on his ex-wife, telling them she was an ABUSER – authorities did NOT take what he was saying SERIOUSLY.”

The man in the video has apparently spoken out as well, saying the psycho woman seen abusing the two kids received only “1600 in fines, a month in jail, two years probation.”

The following video is disturbing and may be difficult to watch

Video of the incident can  be seen here