Daniel Cooper put Travis Wolford in a guillotine choke, which Wolford immediately tapped out of, but not in time to save his shorts. When he stood up, the world knew what he had done.  This guy takes “leaving it all in the ring” to a whole new level.

Promoter Chris Smith posted this video to his Facebook page, and he gives some context to the video.

Everyone is still talking about it. Never seen anything this gross in my entire career of promoting fights but sh*t happens and could happen to anyone. Daniel Cooper literally beat the crap out of “The Brown Bomber” Travis Wolford in Ruckus in the Cage in Beckley Oct. 3. Before the fights started he went to Chili Night and ate some hot chili. During his bout he had a colossal explosion where chili beans and everything he ate landed all over the mat. Says he instantly lost 15 pounds…. Plans on fighting November 13 in Summersville to prove that it was just an accident. Any takers???

Wow.   Where to start. If we’re to learn anything from this, it’s that “Chili Night” and “Fight Night” should be at least a couple days apart.  Smith wastes no time in dubbing the incident a “colossal explosion” and nick-naming Wolford “the brown bomber”.

You have to see the video for yourself, but around the one minute mark, only look closely at the zoom in if you want to see what undigested chili beans covered in shit look like. You’ve been warned… 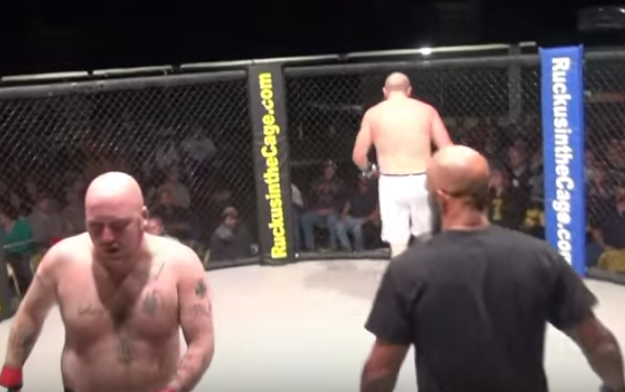